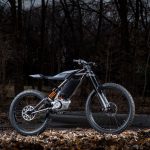 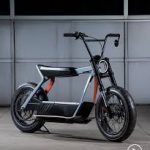 Harley-Davidson recently made an appearance at the 2019 Las Vegas Consumer Electronics Show. During the show, Harley-Davidson confirmed the pricing and availability of the long-anticipated LiveWire electric motorcycle. They also brought 2 new Electric Concepts to the Consumer Electronic Show which are both uncharacteristic of the brand. One resembles an electric bicycle or electric dirt bike and the other resembles an electric scooter. Harley-Davidson is referring to these vehicles as electric motorcycles, but neither of these rides has a name. The electric bicycle/dirt bike has a true motorcycle-style suspension with an inverted fork up front and a Softtail-Esque monoshock in the rear with the swing arm holding the wheel. The second vehicle looks more like a moped/scooter. It has handlebars and wheels like that of a bicycle, a motorcycle-style front fork, a minimalist looking headlight, a basic frame and seat, an electric drive train with a belt drive and running boards that resemble a skateboard that has been sliced in half. The electric bicycle/dirt bike looks like a mountain bicycle without the pedals. Harley-Davidson recently brought these electric motorcycles to the X-Games Aspen 2019. Here is a video of the electric mountain bike. https://www.youtube.com/watch?v=x_6kY-T3cA8                Here is a video of the electric scooter. https://www.youtube.com/watch?v=iDKG6M_xMdA      Speculation is that these 2 vehicles are still very much pre-production models meaning that the electric bicycle/dirt bike and electric scooter may not show up in your nearest show room any time soon, plus there is still time for Harley-Davidson to make minor or major changes to either model.