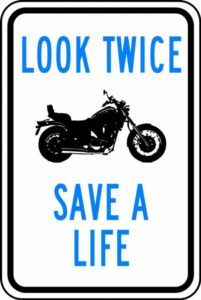 Right up front, I want to say that all of opinions in this blog post are non-scientific, and I have not conducted any research on the opinions of experts, safety organizations, etc. regarding why motorcycle accidents happen. The content of this post is based on years and years of experience representing motorcyclists injured in accidents and reviewing North Carolina accident reports generated by law enforcement officers who were responsible for investigating motorcycle accidents. In these reports, the investigating officer diagrams the accident scene, describes how the collision took place and indicates their opinion regarding what acts or omissions of a particular driver, if any, contributed to the collision. I will first discuss those cases in which the investigating officer finds no fault on the part of the motorcyclist and puts all the blame on the driver of the other vehicle. The overwhelming majority of these reports reveal that the reason behind the collision is the “inattention” of the at-fault driver. When I say “inattention” I mean that the at-fault driver did not see the motorcyclist in time to avoid a collision or simply did not see the motorcyclist at all. When you look more specifically into the actions of a driver immediately before they cause the motorcycle accident, I generally see that the at-fault driver has pulled into the lane of the motorcyclist. They either make a left turn into the path of an oncoming motorcyclist, they pull out from a stop sign or stop light into the path of a motorcyclist coming from their left or right or they pull out of a side street/parking lot/driveway into the path of a motorcyclist coming from their left or right. I cannot tell you how many times over the years that motorcyclists I have represented have told me that the other driver saw them on the motorcycle but still pulled out in front of them or made a left turn in front of them on purpose. I have even had a number of clients who said something like “I could see the eyes of the other driver, and they looked right at me before pulling out in front of me.” I am sure there are some situations like this, but as I explain to my clients, it seems most likely that the other driver looked right through you and your motorcycle. The other driver simply did not pay enough attention to realize that a motorcycle was coming down the road. For that reason, I am a big fan of the slogan/saying “look twice, save a life.”

Some form of inattention is not the only reason that motorcycle accidents take place. I do run into situations where the at-fault driver intentionally causes the accident or the driver knew ahead of time that there was a good chance that his driving would cause an accident (for example, drunk driving)

I have also reviewed a number of accident reports in which the investigating officer puts the blame for the accident on the motorcyclist. It appears to me that about one-half to two-thirds of these accidents involve a single motorcycle accident instead of an accident involving a motorcycle and another car/truck.